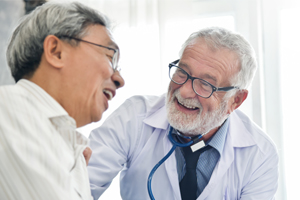 Health risks are a serious and sometimes lifelong issue for many Americans, but some conditions and diseases affect men more than women. Historically, men have avoided going to the doctor to simply avoid bad news about their health, but this may actually be making their health worse. While a number of people are at risk for certain diseases and conditions, there are nine particular health issues that may affect men at a higher rate.
More men die from heart disease, even though men and women develop heart disease at almost equal rates. Heart disease killed 321,000 men in 2013 and is the leading cause of death for most racial and ethnic groups in the United States. Many conditions that follow on this list are actually risk factors for developing heart disease—like high blood pressure, diabetes, smoking, drinking alcohol in excess or physical inactivity. According to the CDC, southern states are more likely to see higher rates of heart attacks, sudden cardiac events and deaths from those events.
Most of the same symptoms that predict a cardiac event or heart disease also are risk factors for stroke. Stroke is the fifth leading cause of death in men and the leading cause of long-term disability. Things like high blood pressure, diabetes, obesity, smoking, an unhealthy diet and lack of physical activity are all contributing risk factors for strokes in everyone, not just men. However, men have strokes at younger ages than women and are more likely to be smokers and not get enough exercise. While not all risk factors for stroke can be controlled (like age, race and nationality), most strokes can be prevented by a series of healthy habits and lifestyle changes. Managing blood pressure and cholesterol, eating healthy foods and staying active, managing medical conditions and seeing a doctor regularly to screen for health conditions are the best ways to prevent stroke.
Both genders experience depression at similar rates, but symptoms can be very different for men and women. It’s common to feel down or sad, but symptoms usually pass in a few days. Depression in women can look like sadness, but depression in men can present as several different symptoms: feeling irritable or angry, fatigued, memory loss, and even physical symptoms. Because in general, men do not express emotions in the same ways that women do, they may not see a doctor about these symptoms and turn to dangerous habits like drugs and alcohol to manage the symptoms. Environmental stressors and illness are the main causes of depression, but genetics may also play a role. Since depression can sometimes lead to suicide, depression is widely known as a health risk for men. While more woman actually attempt suicide, more men are more successful because they tend to use more fatal methods.
A condition specific to males often has no symptoms at all until it is too late. Prostate cancer affects one out of six men in America. Tumors against the prostate usually do not push against any part of the body; therefore they don’t cause pain—and may go undiagnosed for several years. Screening for prostate cancer starting at age 40 is one of the most crucial things a man can do to prevent the spread of the cancer. Symptoms of prostate cancer are rare, so early detection is needed. While no cancer can be predicted, the risk factors for the development of prostate cancer often mirror those of stroke. Some are controllable and some aren’t—you can’t control your family history, genetics, or race—but you do have control over your lifestyle choices and dietary choices.
The connection between lung cancer and men may not seem strong, since members of both genders smoke cigarettes. However, the survival rate for men who develop lung cancer is lower than it is in women, even though lung cancer is the leading cause of cancer deaths worldwide. Overall, 1 in 15 men will develop lung cancer in their lifetime. Lung cancer in men is more prominent than prostate cancer. For smokers, the risk of lung cancer is much higher than the risk for non-smokers, but both groups can still develop the condition. Age seems to be a factor in the diagnosis of lung cancer, as the average age of diagnosis is about 70 years old, with few people under 45 years old also being diagnosed.
Men are also more likely to die of completely preventable unintentional accidents and injuries. Men are more likely to drive while under the influence of alcohol or drugs or drive recklessly and speed. They are also more likely to die from an accidental fall, with risk increasing as they age. Accidents and unintentional injuries can happen to everyone, but men seem to be more prone—the fatality rate for falls is almost 50% higher in men than it is in women.
Diabetes is extremely prevalent in Americans of both genders, but men with diabetes often have symptoms that differ from a woman’s symptoms. Historically, men wait longer to see a doctor if they have a health issue, a tendency that may make their condition worse over time. If untreated, diabetes of any type can lead to heart disease, stroke, coma, nerve damage, kidney damage, and health. Diabetes can even damage eyesight and erectile function. Men diagnosed with diabetes need to take the same measures for treatment that women do—see a physician for a plan of care and follow treatment plans as best they can.
A close relationship with a physician can do wonders for any health issue, but it’s especially important that men see a doctor regularly. Seeing a doctor regularly can help catch health risks early and help put patients on a path to good health for the rest of their lives.
Dr. Gildardo Ceballos
OakBend Medical Group
Disclaimer: The contents of this article, including text and images, are for informational purposes only and do not constitute a medical service. Always seek the advice of a physician or other qualified health professional for medical advice, diagnosis, and treatment.
Sources:
https://www.cdc.gov/dhdsp/data_statistics/fact_sheets/fs_men_heart.htm
https://www.cdc.gov/stroke/docs/men_stroke_factsheet.pdf
https://www.nimh.nih.gov/health/publications/men-and-depression/index.shtml
https://www.pcf.org/c/prostate-cancer-risk-factors/
https://www.cancer.org/cancer/non-small-cell-lung-cancer/about/key-statistics.html
http://www.idph.state.il.us/menshealth/healththreats.htm#3
http://www.diabetes.org/living-with-diabetes/treatment-and-care/men/