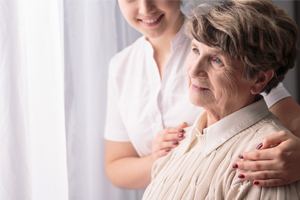 A stroke, or a “brain attack,” kills someone in the United States about every four minutes. It is the fifth leading cause of death in this country, and accounts for one out of every 20 deaths. A stroke happens when blood flow to the brain stops because it is blocked or interrupted. The brain cells in the affected area begin to die, because they stop getting the oxygen and nutrients they need to function. Strokes can be traumatic and can sometimes cause significant damage to the brain and its function.

There are a number of factors that increase your risk for stroke, and while some cannot be controlled, like your family history, gender or race, most can. The National Institute of Neurological Disorders and Stroke estimates that 8 out of 10 strokes can be prevented with changes in lifestyle, diet and management of chronic illnesses like diabetes.

The number one risk for stroke is high blood pressure. Known as the “silent killer,” hypertension affects about 85.7 million Americans, and nearly half of those people do not have it under control. A normal blood pressure range should be around 120/80. If you have blood pressure readings that are regularly above this range, see your doctor right away and make lifestyle changes to keep healthy and lower your risk of stroke, heart disease, kidney failure and a number of other conditions.

In a recent study of dietary choices and their effects, it was found that participants who ate just 500mg more than the recommended amount of sodium per day had a 17% stroke risk increase. The American Heart Association (AHA ) recommends that adults consume only 1500mg of sodium per day—the average American eats more than 3400mg.

Excess sodium intake is directly associated with hypertension, and hypertension is the number one risk for stroke. Surveys by the AHA found that out of 1,000 adults, 54% were incorrectly assuming they were eating less than 2,000mg of sodium per day. You can begin to lower your risk for stroke today by lowering the sodium in your diet. You can visit the AHA website for , cut back on processed and restaurant foods, and choose low-sodium or no-salt foods at the grocery store.

Read the labels of every packaged food you intend to eat and check the ingredient list for words like “sodium,” “salt,” and “soda.”

Do You Know the Warning Signs of Stroke?

Strokes are extremely time-sensitive and every second counts—the sooner you begin medical treatment, the better chances of your survival and recovery. An easy way to remember stroke systems is to think FAST:
F – Face Drooping
A – Arm Weakness
S – Speech Difficulty
T – Time to call 9-1-1