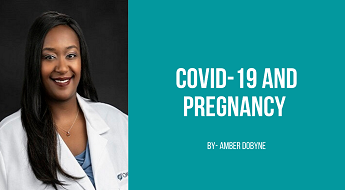 “Pregnancy is generally a joyous time in a woman’s life.  The months leading up to delivery are filled with planning and anticipation of the arrival of your little one.  The year 2020 has changed this outlook with the arrival of Covid-19.

Historically, respiratory illnesses have been thought to increase a woman’s overall risk for severe illness in pregnancy.  In a recent data analysis from the Center for Disease Control and Prevention (CDC), pregnant woman appear to be at an increased risk for certain manifestations of severe illness compared to their non-pregnant peers.  Pregnant woman have a higher risk of ICU admission and need for mechanical ventilation.  Fortunately, there is no increased risk of mortality or risk of death.  In the same analysis, Black or Hispanic pregnant patients were disproportionately affected by SARS-CoV-2 infection.  Pregnant patients with comorbidities such as obesity have an increased risk of complications from SARS-CoV-2 infection similar to the general population with similar comorbidities.

Health care providers should counsel pregnant patients and those considering pregnancy about their potential risk of severe illness from Covid-19 and advise them on actions to employ to reduce their risk of infection.

Pregnant patients are encouraged to

After all this preparedness and anticipation your little one has arrived and you are looking forward to the moment of cuddling and care. Due to the overwhelming benefit to the infant, The American Academy of Pediatrics recommends 6 months of exclusive breastfeeding unless contraindications are present.  The majority of data has not demonstrated a presence of SARS-CoV-2 in breastmilk.  Thus, suspected or confirmed maternal infection is not a contraindication to breastfeeding.

Obstetricians and other Maternal Care Practitioners continue to support mother’s during this time to make informed decisions about nutrition for their infant whether that be exclusive breastfeeding, mixed feeding, or formula feeding.

With so many decisions to be made and actions to carryout to provide a safe environment for yourself and your infant, Covid-19 has made this period unbelievably stressful.  Coping with this stress is one more thing added to your unsaid list of responsibilities as a mother.

Obstetricians and other Maternal Care Practitioners should screen for anxiety and depression during the prenatal period and the postpartum period.  I encourage mothers-to-be and moms to be open in communication with their care team should any of these symptoms arise.  Patients should be encouraged that there are effective treatments and support options available during this troubling time

Lastly, if you or any of your loved ones experience any Covid-19 symptoms